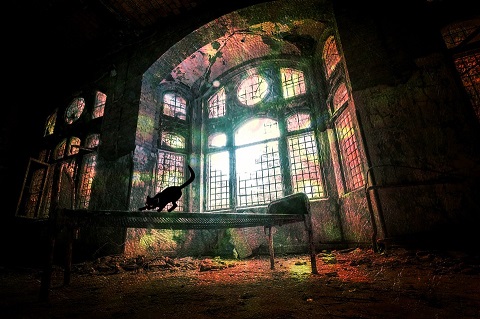 Seeking some spine-chilling and spooky thrills after Halloween? London, the capital of Great Britain is full of ghostly spirits and treacherous tales reported to be haunting several inns, castles, pubs and tunnels give you your dose of horror. Today, we are going to take you behind the scenes of London’s most haunted places that can give you chills down the spine easily.

Ten Bells Pub allows sightseers to dip into the city’s most frightening experience. Earlier labeled after Jack the Ripper, the Ten Bells Pub is an extremely eerie place. It is said that Annie Chapman was mercilessly mutilated and murdered by Jack. After the murder, the staff of the pub has experienced mysterious gusts of wind and poltergeist activities.

Well, the name is very grisly, isn’t? However the reason behind the scene is more horrific. In the year 1629, the dead body of Lady Elizabeth Hatton was found in the cobbled courtyard. After her pitiless murder, her limbs strewn around—but her heart still pumped blood. People experienced paranormal activities here.

Declared as the most haunted places in London, 50 Berkley Square was constructed around 1700s. The top floor is believed to be haunted by the vicious spirit of a lady who died here and her spirit turns into horrible brown fog, and is gruesome enough to take someone’s life. In 1879, a servant stayed in the house and found died next day.

Henry 8th was undoubtedly a cruel king and snatched the lives of many people. Hampton Court Palace was one of his favorite residences and still tagged as a haunted one. It is said that the ear-piercing screams of Catherine Howard’s (the unlucky wife of the king) have been heard clearly from covered passage.

Opened in the year 1902, the creepy underground foot tunnel provides smooth connectivity. Going below the River Thames, the moist, claustrophobic under path makes walkers feel uncomfortable, as if they are being chased by someone. Some pedestrians have also experienced a mysterious couple on a walk in the middle of passageway, who soon disappear into thin air after crossing the tunnel.

The spookiest place is 900 years old and is encircled with a whole host of spooky tales. The story of Anne Boleyn is the most popular one. Many people have spotted the headless body of this lady several times. As per the history, the Anne Boleyn tied the knot against the wish of monarch and was put in prison till her suspected death in the prison.

In the middle of 1970’s, people living around this place complained about inexplicable and strange lights coming from a tombstone in the western part of this cemetery. In spite of continual attempts, researchers have been unable to find any source of light and the place is still a dark mystery for investigators.

Another terror tale in the list, The Queen’s House is capable enough to give you icy goose bumps. The place was occupied by a lady named Arabella Stuart and she was put in prison for an unconventional wedding to William Seymour. The ruler caught both and sent the lady behind the bars where she took her last breath while her hubby got away.

Visit these haunted places after dark…if you dare!!